Two centuries have passed since the lamp patent of sir Humphrey Davy in 1815, in the meantime the industry has radically changed and the whole world with it.

For the uninitiated, sir. Humprey Davy invented a lamp that lowered the risk of explosion inside coal mines. It was a fuel oil flame lamp equipped with a thin brass net that surrounded the burning wick, the oxygen that fed the flame passed through the net but, at the entrance of other gases such as methane, the flame went out without triggering explosions. [1]

This invention was a first attempt to respond to a safety problem in mines with a device that had the function of limiting the risk of explosion, well before the arrival of the electric current brought other risks. 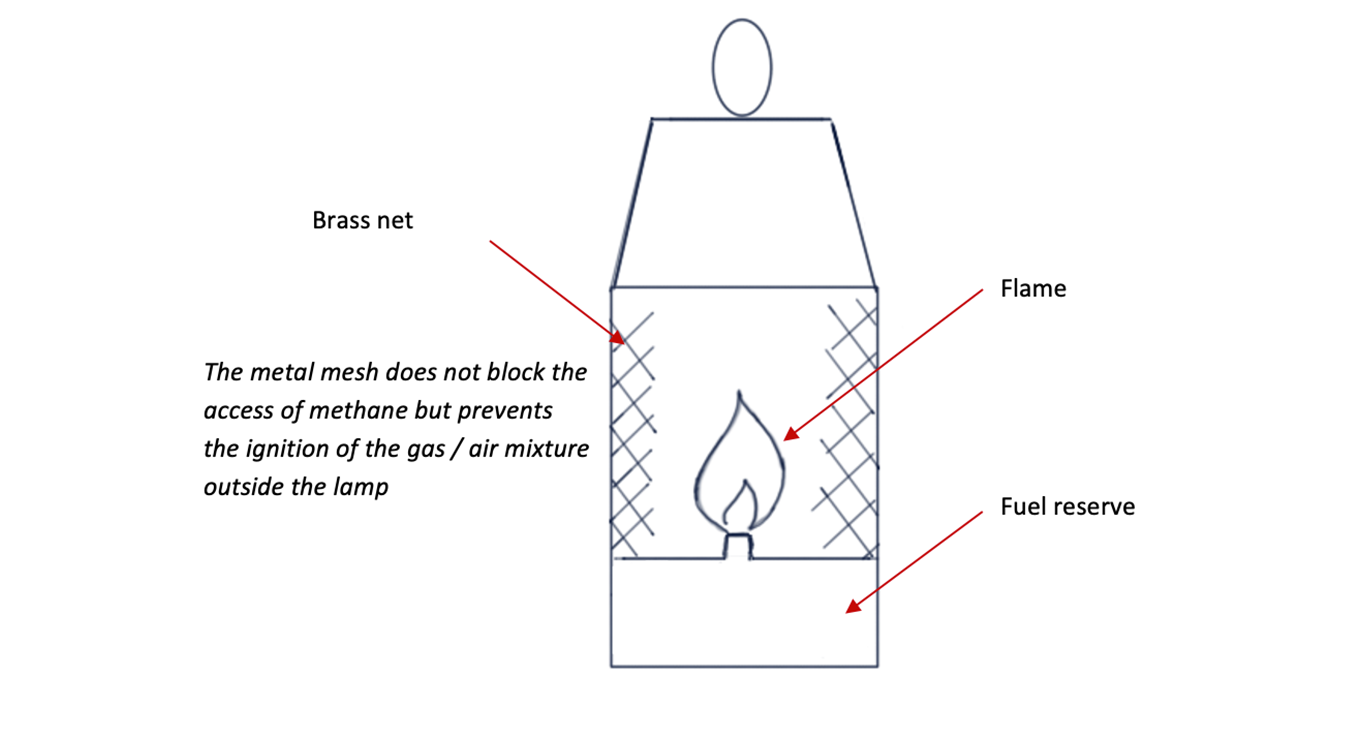 The epic of coal extraction and the first accidents

Coal is a sedimentary rock that can be found on the surface of the earth's crust or in underground mines. It is part of the so-called fossil fuels and can be used to produce heat and electricity.

Its great exploitation began in the eighteenth century following the invention of the steam engine. The latter pushed the industrial revolution in the United Kingdom where, since the early decades of the nineteenth century, the coal mining industry developed massively to find fuel.

It immediately became clear that work in coal mines was very dangerous, if inhaled coal dust damaged the lungs and led to chronic diseases, furthermore another critical aspect was the presence of pockets of grisou gas that could reveal themselves during excavations bringing at risk of suffocation and/or explosion. Grisou is a gas composed mainly of methane present in mines, where it tends to accumulate in pockets inside tunnels.

Therefore, an initial blaze of burnt gas can raise the coal dust, setting it on fire and triggering an explosion of devastating proportions.

To give an idea of how dangerous it was at the time to work in the mine, just think of the use of the canary in a cage that was advanced by the first man to go down to the mine, the canary would have been agitated in the event of a limited quantity of gas and it would have died if the concentration had been high. An ante litteram gas detector.It is therefore not surprising that the first attempts to develop explosion-safe equipment arose in this particular context.

Before the advent of the use of electricity, lighting was achieved by means of combustion lamps, so we can understand how difficult it was to illuminate the tunnels of underground mines without incurring the ignition of grisou gas. This prompted the emergence of more technical solutions to the problem of making a lamp safe for use in the mine.

Davy's lamp is named after its inventor Sir Humphry Davy who presented his invention to the Royal Society in 1815 and also won the Rumford Medal, a cash prize. They were the first safety lamps that replaced the open flame candles used up to that time.

Sir Humphry Davy at the beginning of the nineteenth century was a first-rate scientific personality, a member of the Royal Society of which he was then president, applied the electricity recently made available thanks to the battery invented by the Italian Alessandro Volta to his studies as a chemist. This allowed him to be the first to apply the phenomenon of electrolysis which led him to isolate some chemical elements for the first time, in particular: calcium, strontium, barium, magnesium and boron.

This situation decreed the success and diffusion of his lamp against other models that had been invented in those same years. Previous to its invention, in fact, there was the William Reid Clanny lamp, datable to 1813. The latter was not particularly successful, something that was not lacking in George Stevenson's lamp, perfectly contemporary to that of Davy and slightly different in construction. To penalize Stevenson's lamp, called Geordie, was the lineage of its inventor. Although he was a very wealthy entrepreneur and known as one of the fathers of the railway industry (just think of Stevenson's locomotive), he did not enjoy the undisputed scientific prestige of Sir Humpry Davy. Nevertheless, the Geordie lamps had a certain diffusion in the north east of England in the nineteenth century until the introduction of electricity. 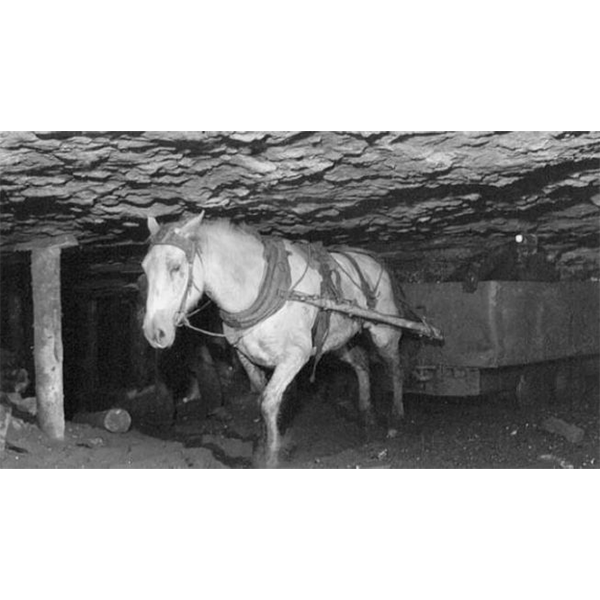 To get an idea of what it was like to work in a 19th century European mine we must think that the work was still carried out entirely by human and animal force, there were in fact horses (Fig. 2) preferably small, specially trained to the burden of carts loaded with coal.

An important improvement was achieved with the use of forced ventilation of the tunnels, an operation that made it possible to improve the environment where miners and animals worked, maintain a suitable temperature and remove pollutants and dangerous gases present, such as grisou.

Davy's lamp played a role in improving mine safety but some critical issues remained. A defect attributable to this lamp was the little light it was able to provide, with the miners forced to keep it very close to the work area with the risk of damaging it. Another problem was represented by the ignition of the flame which had to be carried out by opening the lamp itself, exposing the flame to the external atmosphere without the protection of the metal mesh. In case of extinction, it was therefore taken outside the tunnels and represented a great inefficiency, especially in the face of the ease with which the forced ventilation extinguished the flame.

Throughout the nineteenth century, the use of fuel oil lamps was the only way to bring light into the dark tunnels of the mines. This prompted the development of their design which changed over the years in an attempt to remedy the critical points of Davy's lamp.Among the most important changes was the introduction of a cylindrical glass around the flame and different alternative routes of the combustion air.

The first modification improved both the brightness and the insensitivity to air currents, the second allowed the flame not to revive too much in the face of excessive ventilation.The nationality of certain models also played a role, pushed to use by the respective national authorities. A case worth mentioning is that of the Mueseler lamp, the use of which was made mandatory in Belgium in 1864, which integrated the glass tube and the air inlet from above, making it brighter than contemporary English safety lamps.In Germany, Wolf's lamp (1883), fueled by petrol, was successful; in the presence of grisou, instead of going out, it formed a conical flame that was tinged with blue.

The ease of opening the lamp also proved to be an Achilles heel. As already noted, in the face of the extinguishing of the lamp, the miners often opened the lamp to relight it on the spot, involuntarily triggering explosions. Many accidents were traced back to this bad practice and an attempt was made to respond to opening systems that required a suitable tool, avoiding manual opening.

Figure 3: The Mueseler lamp, presented in Belgium in 1840

The progress in electric lighting

The arrival of electric lighting was a 19th century achievement, but we should not think that its development was immediate, far from it, the invention of the incandescent light bulb took almost a hundred years.

The aforementioned H. Davy presented how electricity could be used to produce light in a demonstration in 1802 held at the Royal Institution of Great Britain. He used over 2,000 cells to glow a thin strip of platinum. The light emitted was scarce and the metal melted in a short time. Numerous attempts followed that would have led to the development and improvement of devices capable of creating electric light throughout the century.

Then there was the aspect of the supply of electricity, we are talking about an era in which the electricity grid did not exist and the lamps that could be used in the mine had to be powered by batteries.In this context, only at the end of the century, inventions appear, specifically designed to increase the safety of these devices in the field of mining.

The use of incandescent lamps could lead to the ignition of dangerous gases by breaking the glass bulbs, which at the time were very not very robust. The filament remained at high temperatures long enough to trigger any presence of methane gas. Furthermore, it was observed that the same contact, which closed or opened the circuit composed of the lamp and the batteries, produced igniting sparks.

We can cite the patent of the English inventor Theophilus Cad, registered in the United States with the number 413.708 in 1889. In his creation the inventor describes two devices. The first of these is an airtight chamber where the contact is located, a precursor of the concept of segregation between ignition and explosive atmosphere of today's legislation. The second is the volume closed by the glass that houses the lamp equipped with a valve that allows the introduction of air under pressure. This air then acts on a diaphragm to push the contact to close. It follows that if the glass is broken, the pressurized air comes out and the contact opens the passage of electric current. This avoids ignition due to damage to the lamp. Also this expedient in some ways recalls the protection by pressurization, one of the modern methods of protection based on segregation. 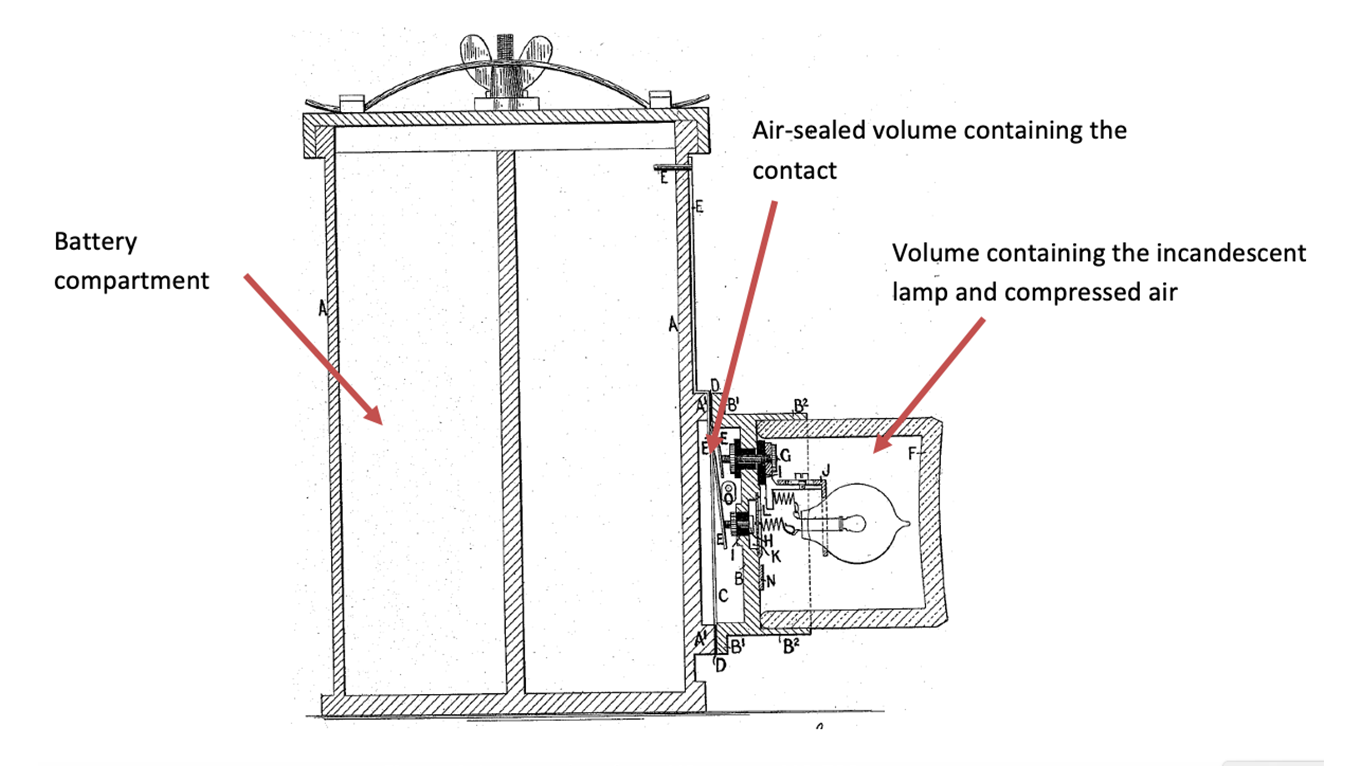