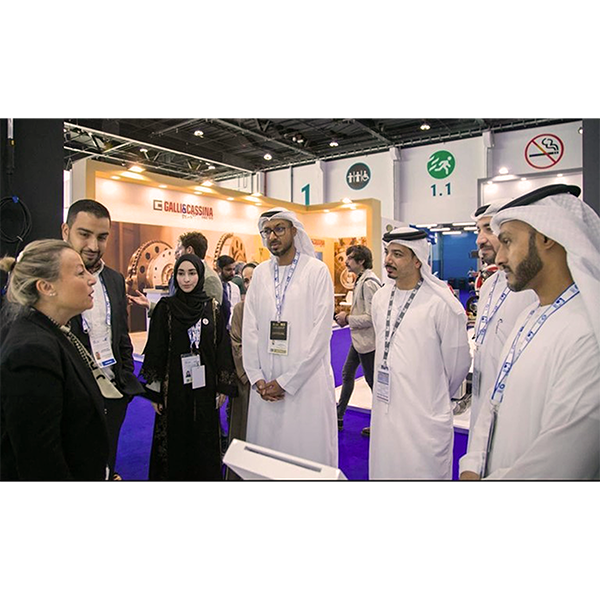 The 2022 edition of ADIPEC Abu Dhabi could not have ended in a better way for Cortem Group: the members of the Ministry of Industry and Advanced Technology visited the Group's stand and chatted with Mrs Marianna Saragaglia and Eng. Saad Bennani, respectively Managing Director and Sales Manager of the local Emirati company Cortem Gulf.

The MOIAT delegation met some Italian companies, including Cortem Group, and was attracted by the new LED lighting fixtures on display and by the sector of explosion-proof electrical equipment for areas at risk of explosion. The representatives of the Ministry wanted to deepen the history of the Group in the Emirate territory given that one of the objectives of the Ministry is to develop an integrated support system for the industrial sector of the United Arab Emirates that provides incentives to attract talent, skills, entrepreneurs and start-ups and that creates a local productive industrial fabric.

Cortem Group has been present on the UAE market since 2006 and, since 2015, has been operating thanks to the Sister Company Cortem Gulf. Established as the Group's Emirati commercial headquarters, it initially became a small production unit and, now, an important ICV-certified design, assembly and after-sales service center, with an excellent market positioning developed and achieved in the last three years.

Local companies such as Cortem Gulf, directed by a management from the Italian headquarters with twenty years of experience in the Gulf countries but perfectly integrated into the industrial fabric in which it operates, are those on which the Ministry of Industry and Advanced Technology of the United Arab Emirates aims with an incentive system to support and develop the local industry.