Ventilation of hazardous areas due to the presence of gas

In the newsletter of last month, we started talking about the classification of areas with the presence of gases, vapors and mists. In...

In the newsletter of last month, we started talking about the classification of areas with the presence of gases, vapors and mists. In this newsletter we will discuss the effectiveness of ventilation of areas with danger of explosion. We’ll evaluate, also, the provisions of international, European and North America standards.

As we saw in the previous newsletters, around the world are followed the recommendations of IEC 60079- 10-1 standard, now known and become the European standard EN 60079-10-1. This standard is relevant to the substances classes of gas, vapors and mists. The EN 60079-10-2 concerns the classification of hazardous areas for the presence of combustible dust.

EN 60079-10-1 standard applies to all places in which substances in form of vapor or gas are present and can cause explosive mixtures along with air. The annex B of this standard is fully relevant to ventilation. As regards Italy, it’s available the Guide CEI 31-35 which sets out principles for determining the scientific assessment of the ventilation degree.

This guide can be a valuable reference for all engineers who need to classify hazardous areas and want to be guaranteed on the accuracy of their assessments. However, in the rest of the world and in particular in Anglo-Saxon world, the EN 60079-10-1 is considered sufficient and the formulas that can be found in the Annexes are only examples. Anyway, the standard explicitly allows other different methods of assessment.

DEFINING THE EFFICIENCY OF VENTILATION

As we saw in the newsletter of last May, in order to assess the dangerousness of the area, once defined the type of substance that may be present in a plant during the normal operation and which are the possible sources of emission, you must define the ambient temperature and the ventilation characteristics.

In the Annex B, there are signs which allow assessing the degree of ventilation defining the extent of zones. These appendices also provide formulas that allow you to calculate the emission rate, the evaporation of pools, the dangerous distance dz and the ventilation data.

As regards Italy, in the GC appendix of CEI 31-35, however, there’s a series of statistical data on atmospheric pressure, the density, the seasonal average temperature and wind for several Italian locations. The assumed Vz volume is the volume in which the average concentration of flammable gas or vapor is 0,25 or 0,5 times the LEL. The effectiveness of ventilation is evaluated in degrees VH, VM, VL, based on the hypothetical volume of V0 dilution, as shown in the figure below. 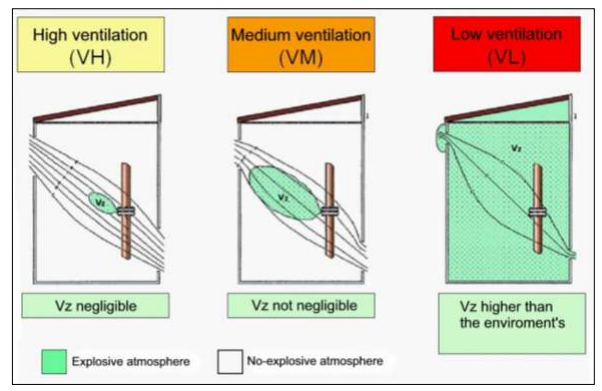 In addition to the degree of ventilation, the parameter of the “Availability of ventilation” must be also considered and it can be:

Ventilation which does not meet the requirements should not be considered as a contribution to the ventilation of the place.

DETERMINE THE TYPE OF AREA

At the end of the above procedure, which can be done using a set of computations defined by IEC Guide 31- 35, we have to proceed determining the type of area, using the table b1 of EN 60079-10-1 standard, and calculating the distance that determines the hazardous area extension. 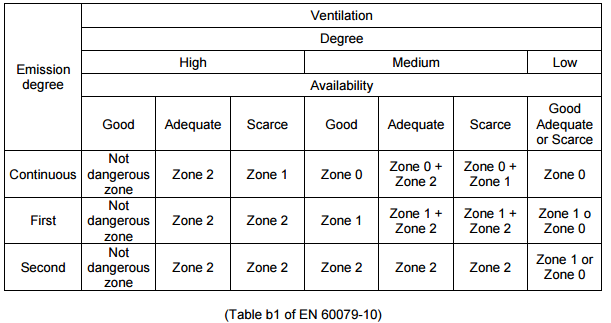 As we saw in the previous month's newsletter, the extent of a hazardous zone depends also on the mode of issue, in particular by:

The gases and vapors tend to spread in the air occupying the entire space. Therefore the gases spread into the air depending on their weight and the ventilation.

In order to have a global vision of hazardous areas international classification, we’re going to have a quick look at the criteria adopted in the United States, Canada and in all countries with American influence. In the U.S. and Canada, the division of hazardous areas shall be based on the national standards NFPA 70 Article 500 NEC and C 22 Part 1 Canadian Electrical Code.

In accordance with these regulations, hazardous areas are divided into two divisions:

The most obvious difference between the European and American practice is the lack of presence of a division equivalent to Zone 0. This comes from a more pragmatic and less philosophizing view of Americans against the Europeans.

Engineers from overseas consider that, if in an area may be presence of a potentially explosive atmosphere during normal operations, this is a dangerous area. The stay time of gas, its concentration and statistics are not important. In this case, the area is called "Division 1". When the danger can exist only in case of failure this is called "Division 2".

HAZARDOUS AREAS ON THE BASIS OF SUBSTANCES

Hazardous places based on the substances present are divided into:

Places of Class I are divided in four subgroups (A, B, C, D) on the basis of the gas present.

Places of Class II are divided into three subgroups (E, F, G) on the basis of the dust present.

Places of Class III do not have, however, subgroups.

DIFFERENCES BETWEEN THE EUROPEAN AND THE NORTH AMERICAN PRACTICE

The following table highlights the major difference between the European and North American practice regarding the classification of hazardous areas.

If this issue is irrelevant for Italian and European markets, it becomes important for those companies who design and build facilities in areas of American influence. Can happen to work for a plant designed by an American company with the classification of areas made using U.S. criteria but the equipment are manufactured in Italy or in Europe.

The protectionism of the two economic blocs has meant that European equipment cannot be sold in the United States if they are not specially designed according to their standards and certified by American laboratories and the same happens in Europe for equipment produced by American companies. But in all other countries of the world where no regulations exist, are used either European or American.

Today, with the start of the process of the international standardization through the issue of the IEC standard that the U.S. also are accepting and implementing, it is expected that in the space of some years it will be possible to have a set of rules accepted by all countries, with obvious benefit for the safety in the workplace.