The use of stainless steel on explosion-proof equipment

In industrial plants such as petrochemical, chemical and, in general, in places with potentially explosive atmosphere and with possible...

In industrial plants such as petrochemical, chemical and, in general, in places with potentially explosive atmosphere and with possible presence of gas or explosive and aggressive dust, different materials may be used, depending on installation, explosiveness and corrosion characteristics.

The materials used today in these areas for the realization of electrical equipment, lighting fixtures, fittings and components, are mainly divided into two categories:

In this article, we talk about the use of stainless steel as a raw material for the production of electrical equipment and materials, suitable for installation in potentially explosive environment and its ability to withstand corrosion caused by weather and aggressive substances.

1. Some types of stainless steels

The types with low carbon content of these classes are the 1.4306 (AISI 304L) and 1.4404 (AISI 316L). They have a lower carbon content, ≤ 0.03%, to avoid problems relating to the corrosion resistance in the presence of welds, and they are preferred compared to steels described above.

The reference Standard is the EN 10088, which consists of three parts:

The designation system of EN 10088 is based on the European steel number and the name of the steel.

44 denotes the group of stainless steel

17-12-2 denotes the percentage value of the main elements in the alloy, in the identical sequence of the description of symbols.

The Table 2 shows the chemical composition of austenitic stainless steels which are usually employed by our company and are normally quoted in the construction specifications for use in hazardous areas, according to the classification of the EN 10088-1 standard.

3. Austenitic steels used for the construction of electrical equipment

Austenitic steels, which are usually used for the construction of electrical equipment, suitable for environments with risk of explosion and in the presence of aggressive substances, are mainly:

The presence, sometimes combined, of acids, whose aggressive action is exacerbated where the combustion air is contaminated by the presence of other corrosive substances, can cause severe injuries of the surface. Specifically, in harsh environments such as chemical, petrochemical, oil and most industrial and tertiary environments, the acids used, if dissolved in the air, are considered to be highly corrosive. The use of austenitic stainless steel AISI 316L, ensures resistance to attack of corrosive components.

Stainless steels are defined in this way by the fact that, in the presence of an oxidizing environment (therefore also in contact with the air that contains oxygen), a protective layer is formed on their surface consisting of adsorbed oxygen. This is the so-called phenomenon of passivation.

This phenomenon in stainless steel, in ideal conditions, occurs naturally and immediately. As soon as this metal is scratched or cut, removing one part, the protective layer regenerates immediately.

This protection can also be artificially and optimally induced carrying out a particular chemical treatment by immersing the products in sequence, first in pickling acid and, subsequently, in a passivating acid. This treatment enhances very significantly the corrosion resistance, making this invisible layer, which has the thickness of a few atoms (about 0.002 microns) and which reform spontaneously, an excellent barrier to oxidation and corrosion. Essential condition for the formation of a protective layer is the presence of a sufficient amount of chromium.

Why they are called stainless steels if they oxidize?

This term does not correspond to the true nature of these metals. In fact they oxidize. This means that they have the possibility, thanks to the content of alloying elements, in particular the percentage of Chromium (Cr), of "self passivate": create a layer of invisible oxides of molecular size which protect the underlying metal from corrosion by external agents.

This layer guarantees the coverage of the metal, although locally occurred abrasion or removal of the protective film. So it’s necessary to let the material to exchange with the environment a quantity of oxygen, so that it can be considered in the best conditions of passivation.

This concept is very important for a good resistance in time and to counteract adequately the different cases of corrosion.

Of course, this passive film can be more or less resistant and more or less anchored to the material depending on the concentration of chromium in the alloy and also the possible presence of other elements such as nickel (Ni), molybdenum (Mo), titanium (Ti), etc. 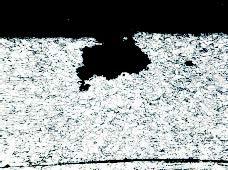 The appearance of the surface finish is critical to avoid the use of too noble alloys. It appears intuitively that the more a surface is smooth, the more the possibility of anchoring of an aggressive element decreases. The passivity film that covers it gives the corrosion resistance of stainless steels. In fact, this film will be formed much more easily and will be much more stable better is the substrate finish.

The resistance to corrosion, in principle, will be the higher, the greater will be the smoothing of the surface, that is the lower will be the surface roughness of stainless steel. In addition, may be considered other factors such as the bond that exists between the cleanability and the greater or lesser smoothness of a surface.

The main types of finishes are:

6. Corrosion, the enemy of stainless steels

One of the characteristics of stainless steels and one of the reasons for the continuing spread of their use is certainly their resistance to corrosion. However, it would be wrong to think that such materials may hold wherever and however to corrosion.

Their resistance depends on many factors such as:

We can say that the chlorides (CI) are the main enemies of stainless steel, because that can break the film of passivation and prevent its reformation. The concentration of chloride ions and the acidity (pH) are, together with the temperature, the determining factors when choosing the type of stainless steel.

The phenomenon of corrosion, if looked closer, may be very different and, therefore, it’s important to understand the mechanism and the causes that generate it, in order to take appropriate action in the choice of materials to use.

The most dangerous types of corrosion are usually those located, which may give rise to the formation of cracks, holes, and fissures.

On the contrary, generalized phenomena are the less dangerous because progressive and fairly constant in time. This allows determining, with sufficient approximation, the duration of the material subject to corrosion.

However, determine quite precisely the duration of an equipment placed in an aggressive environment it’s a very difficult task because the parameters that determine it are extremely complex and diversified.

The main types of corrosion are:

Stainless steels are materials that are used for many applications in various fields in which it is required to resist the aggression of various environments. The knowledge of the main factors that determine the corrosion resistance and other aspects that can determine the trigger is essential for a correct choice of the right league. By contrast, recognize the type of corrosive phenomenon that occurred is surely basic to be able to properly select the type of steel to be used.

In view of the arguments outlined above, Cortem Group decided, for all equipment and products that need to be protected from such aggressive agents, to adopt the use of stainless steel of the austenitic type, of series AISI 304 and/or AISI 316L. This is in function of the applicability to the specific product and, in addition to comply with the required specifications of our customers, even after the verification of compliance with the chemical/physical to such requests, operating with a series of experimental analysis at our laboratory for internal testing or through laboratories external accredited.