The use of batteries in hazardous areas

1. Type of batteries and technical evolution The electric energy in alternating current produced by thermal systems (coal-fired or oil...

1. Type of batteries and technical evolution

The electric energy in alternating current produced by thermal systems (coal-fired or oil power stations etc.) or by hydroelectric plants, is "non-accumulable" while the energy in direct current can be stored using devices called "Battery". This system allows to dispose of the energy over time and to be able to use it even in the absence or failure of the supply of traditional energy in alternating current.

With the rechargeable batteries, the charge can be completely re-established through the application of adequate electrical energy, with voltage/current control. The most important characteristics are:

Some types of rechargeable batteries are susceptible to damage due to a complete discharge, while others must be cyclically discharged in order to avoid a rapid degradation of performance, due to the "Memory" effect.

The technical evolution has made significant steps, putting on the market increasingly high-performance models, with different construction technologies that we list below only partially for typical uses in industrial plants with or without presence of potentially explosive gases or powders:

The lead-acid battery is the fundamental constituent of the common accumulators. When the circuit is open and fully charged, the voltage at the poles of a single lead-acid cell is 2.12 V, with the typical base formation of 6 elements in series giving a voltage value of 12.72 V, which vary respectively from 2.12 to 2V and from 12.72 to 12V in the functional phase.

The nickel-cadmium battery employs nickel (Ni) and cadmium (Cd) metals as chemical reagents. As the typical values of each 10-series battery in series of 1.2 V, it is also used as a substitute for high-load lead-acid batteries (Heavy duty), for example in emergency power systems in lighting systems (lighting fixtures powered by direct current or in AC/DC/DC/AC conversion systems, commonly called "UPS" Uninterruptible Power Supply).

Nickel-metal hydride battery is similar to NiCd battery, but the hydrogen-absorbing anode is an alloy instead of cadmium. This type of battery gets to have two or three times the capacity of a NiCd battery of the same size and a less significant "memory" effect.

Alkaline batteries may be non-rechargeable (disposable) or partially rechargeable.

Those rechargeable, provided that the charging sys’tem is designed for this use, can be recharged and have the advantage of a small self-discharge, with the advantage that they can be used in dedicated equipment such as lighting fixtures with their own battery and system of maintenance incorporated. 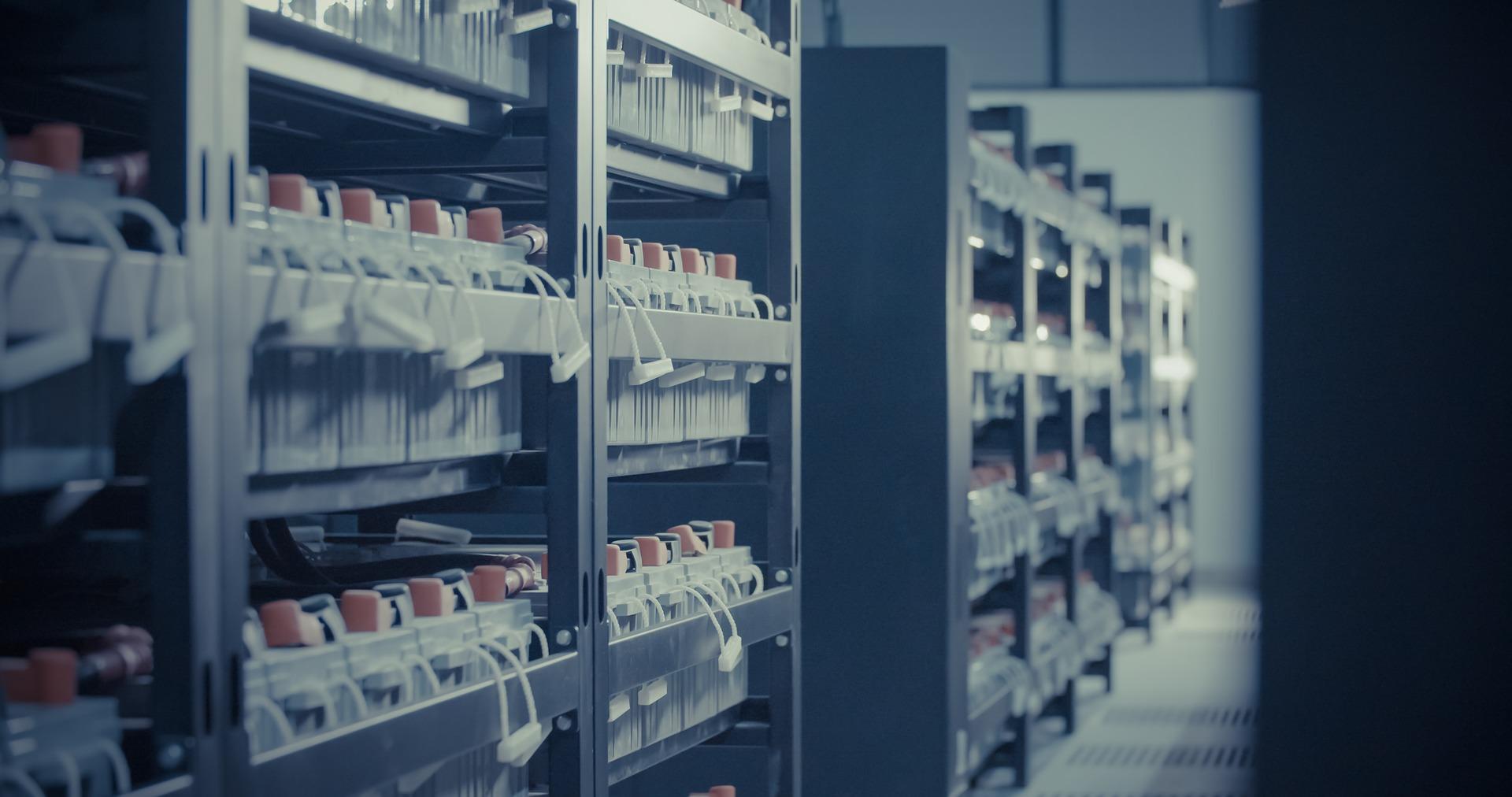 Summary table about the different evolutionary technologies with specific characteristics

2. The use of batteries in environments with risk of explosion

gases or dust are mainly subdivided into two large families, such as:

For the determination of the classified area, the relevant standard is EN 60079-10-1 "Explosive atmospheres - Part 10-1: Classification of places - Explosive atmospheres for the presence of gas". Its prescriptions must be applied, in order to analyse correctly, depending on the nature of the gas present, which type of classification must be applied to a specific area. In this regards, it should be noted that, in the case of an area used for batteries charge, the choice must also be made based on the specific type of battery and its emission of gas in the open air.

The IEC 50272-2 Standard deals with the requirements to be adopted to obtain an acceptable level of safety in the battery rooms for stationary applications with a maximum voltage of 1,500V in direct current, in order to prevent risks related to electricity, gas emission and of electrolyte. The legislation, in particular, is based on the requirements contained in the product standards, in order to provide provisions that guarantee the safety of the place of installation.

The IEC 62485-3 Standard, which replaces the old IEC 50272-3 Standard, applies to accumulator batteries and their installations providing safety, installation, use and disposal prescriptions.

4. The formation of gas

In the batteries charging and/or recharging phases, which use aqueous electrolytes, gases are emitted from all the cells forming the battery. This is due to the effect of water electrolysis by the charging current which produce hydrogen and oxygen that, if introduced into the ambient atmosphere and in a concentration of hydrogen higher than 4% by volume in the air, can create an explosive mixture.

When the total charge status is reached, the electrolysis of the water occurs, according to Faraday's law and the emission of gas from the cells can be considered finished approximately an hour after the interruption of the charge. However, must be considered the possible leakage of gas, trapped inside the cell, when the battery is moved and/or during the handling phases of the user machine such as the forklift or the scrubber or other handling machine.

The prescribed air flow must preferably be ensured by natural ventilation or, where not possible, by forced ventilation. They are considered safe when, under conditions of natural or forced ventilation, therefore defined as "explosion-proof", the hydrogen concentration is guaranteed below the safety threshold of 4% by volume in the air.

In presence of natural ventilation, rooms and charging areas must have an inlet and outlet of air made with openings having a minimum free surface calculated, based on the input/output air velocity being at least 0, 1 m/s and:

In case of forced ventilation, the air flow rate "Q" must be calculated in order to guarantee the required air exchange, with the following formula:

This formula is substantially valid even at 25°C and, considering the application of the safety factor, it can also be applied to the maximum operating temperature of the battery, without further adjustment of this temperature.

The air extracted from the charging areas or rooms must be dispersed in the outside atmosphere.

6. The ventilation of battery compartments

When there are removable cover accessories on the batteries, they must be removed before loading, in order to allow the ventilation, the possible leakage of gas produced and to facilitate the cooling of the batteries. Ventilation openings must be on the battery containers to ensure that no dangerous gas accumulation occurs during discharge or inactivity periods. The surface of the ventilation opening must be at least equal to:

7. Closed enclosures and environments for batteries

The battery storage bays, the containment basins and the compartments must be made with an adequate mechanical resistance and built with acid-resistant materials generated by the electrolyte, in order to be protected from the harmful effects due to infiltration or leakage of electrolyte

All the necessary and indispensable protections must be implemented, in order to avoid the spreading of electrolyte on equipment or components underneath the batteries or on the walking surface.

Measures must be implemented to allow the removal of any accumulation of electrolyte or leaking water from the battery tray.

The areas or rooms for charging must have a floor covering able to resist acids and have a resistance of less than 100 MΏ in order to avoid sparks from electrostatic charges. The battery storage bays, the containment basins and the compartments must be made with an adequate mechanical resistance and built with acid-resistant materials generated by the electrolyte, in order to be protected from the harmful effects due to infiltration or leakage of electrolyte.

In order to avoid the risk of accidents during the charging phases and to allow a correct charge, the connection between the charging device and the battery must be correctly carried out, in accordance with the prescriptions given by the manufacturer and the plant regulations required by EN 60079-14 standard.

In accordance with the EN 62485-3 standard, all the requirements described must be implemented, such as:

All electrical equipment such as battery disconnecting devices, in/out cable connection housing from the battery container or from the charging room, must be equipped with suitable equipment for dimensions and technical characteristics that comply with EN 60079-1, EN 60079-7, standards, with reference to the group to which the battery belongs.

Cortem Group produces electrical equipment and cable glands suitable for such purposes to allow the installer to carry out a correct execution and, at the same time, to verify that what is done corresponds to the installation instructions given in support of its products.

We conclude by recalling that all sizing and selection are the prerogative of the designer who must always refer to the specific mandatory regulations and that he is entirely responsible for the analyses, calculations and the consequent executive project, certifying the compliance with the regulations.