The zones of the plant, the groups and the temperature classes of Gases

Installers and designers often ask themselves questions relating to the choice of the right electrical appliances to be installed on the plant site. This choice depends on a series of parameters, among these we will deepen the probability that an explosive atmosphere can form (concept of zone) and the type of substances involved in this formation (concepts of GAS group and temperature class).

Among the various areas of application of the ATEX directive, the most widespread is the one concerning surface systems with the risk of the presence of an explosive atmosphere due to a mixture of air and flammable substances in the form of GAS or vapor. [1]

In this sector, installers and designers often ask themselves questions relating to the choice of the right electrical appliances to be installed on the plant site. This choice depends on a series of parameters, among these we will deepen the probability that an explosive atmosphere can form (concept of zone) and the type of substances involved in this formation (concepts of GAS group and temperature class). 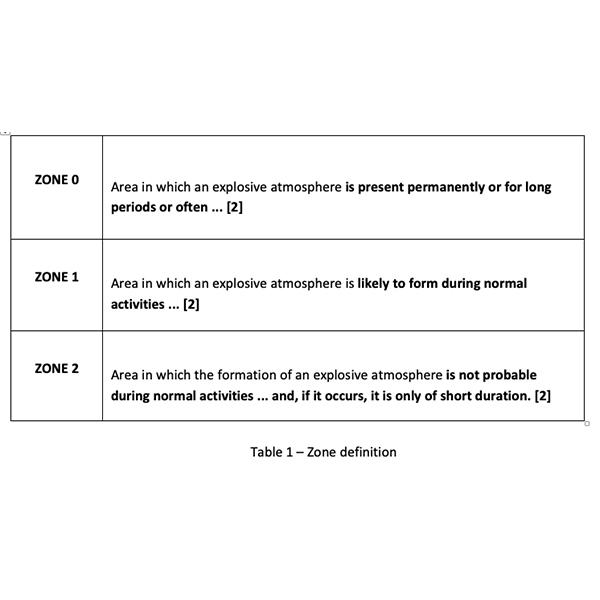 The division into zones

The concept of zone is contained in the harmonised European legislation and in Directive 1999/92/EC. The zone provides an assessment of the probability that there is a potentially explosive atmosphere consisting of a mixture of air and flammable substances in the form of gas and vapour.

Defining a certain area of the plant as zone is the obligation of the employer [3] who makes use of professionals who perform this particular classification in accordance with harmonized legislation (CEI EN 60079-10-1).

The gases present in the system and the group of GAS

In the first classification in groups of GAS, the substances were tested and classified according to two parameters: the MESG and the MIC. The MESG measures the difficulty of containing the explosion, the MIC the ease of triggering the explosion. Based on these parameters, the GASs are divided into groups IIA, IIB and IIC. 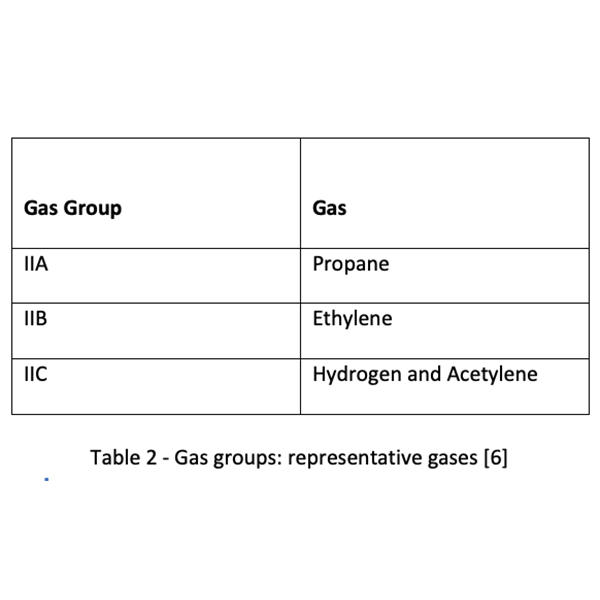 Without going into the technical details of the classification, we can be simplified by saying that: going from group IIA to group IIC, the difficulty in containing the explosion increases while the ignition energy required for the explosion decreases.

In summary: the difficulty in managing the risk of explosion increases when passing from a GAS of group IIA to a GAS of group IIC. To make this classification less abstract, it may be useful to memorize some particularly significant gases of the relative Group (see Table 2). 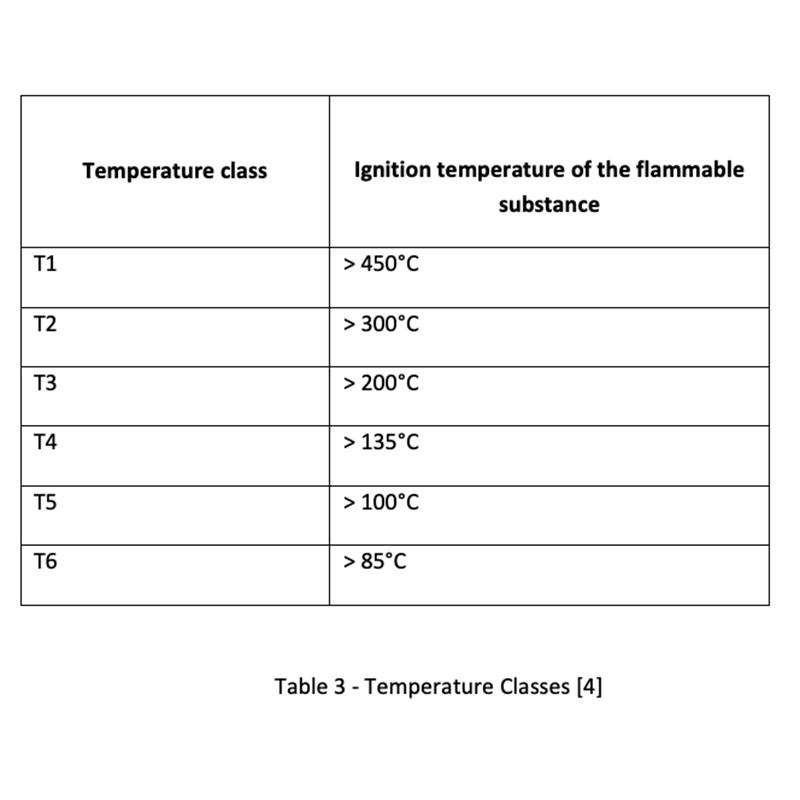 The second classification is related to the ignition temperature of the gas (see Table 3). 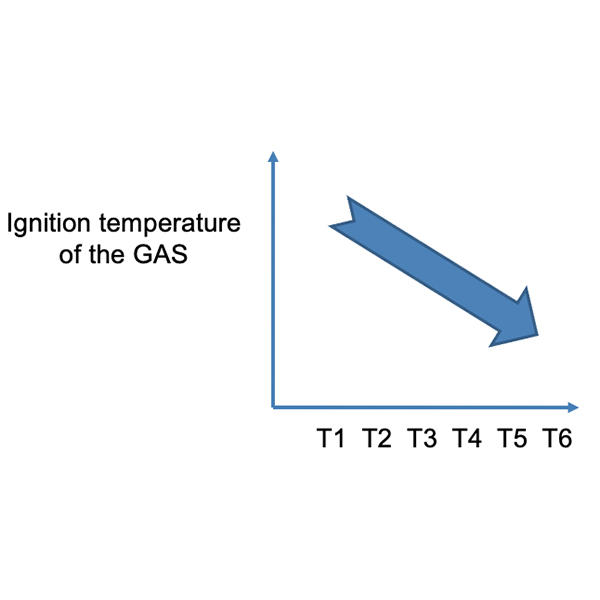 In general, a substance with a T6 temperature class will be more difficult to manage than a T1 class because it will catch fire (i.e., it will ignite the explosive atmosphere) at a lower temperature. That is, moving from T1 to T6 the management of the substance becomes more difficult.It should be noted that the Gas Groups and the Temperature Classes are two classifications based on independent parameters.

We find both parameters in the classification standard for gases and vapours, the CEI EN 60079-20-1.

We have described the site of the plant having defined the probability of the presence of the explosive atmosphere of the GAS (Zone) and the classification of the GAS according to the two criteria: GAS GROUP and TEMPERATURE CLASS.By way of example, a request for ATEX material could contain information relating to the Zone 1 IIB T3 or Zone 2 IIB T2 site.

The ATEX 2014 34 EU directive makes a first distinction between equipment for mining plants and equipment for surface plants. In the latter area, it then divides explosive atmospheres due to flammable gases, vapours or mists from those due to dust. In this article we do not talk about "mists" as they are excluded from the application of CEI EN 60079-14.[2] DIRECTIVE 1999/92/CE- ANNEX 1 (2)

The matching between the equipment and the installation site

Application of some simple rules to make a first match between the equipment and the installation site based on EPL, gas group and temperature class of the equipment.

The EPL, the subgroup and the temperature class of the equipment

The installer must have clear and defined the information relating to the level of protection guaranteed against the risk of explosion regardless of the function of the device. This information can be found in the marking of the device and it is completed with the instructions for use.