Concepts of a proper sizing of equipment and electrical equipment for installation in potentially explosive atmospheres with the presence...

In this treatment we will discuss the concepts and the guidelines adopted for the proper plant design, the electrical plant dimensioning and the related equipment selection.

During the engineering construction and development stage, the electrical designer will be responsible to collect from all other disciplines, information on quantities, physical and orographic location of all electrical equipment to be powered and managed.

Except for specific plant requirements stated by customer requests, the sizing is planned analyzing the following variables:

The distribution system will be designed according to factors that may influence the choice such as continuity of operation, the degree of reliability of the power sources, the total load, the concentration of utilities, the operating costs, a feasible maintenance, etc…

The choice of equipment will be a function of the sizes resulting from the calculations of the power absorbed by the load and with the safety factors applicable, selecting such equipment in the range of standard sizes available on the market.

The capacity of the electrical system consists in the dimensioning of each individual user and of the whole, in order to meet the maximum demand of the load expected in the most demanding operating conditions and at maximum concurrence of continuous loads and of possible further intermittent loads. From this sizing derives the total concurrence capacity of the electrical system, considering to have a possible future expansion of that facility.

The maximum voltage drop in the various parts of the electrical system must be contained within the limits which are usually defined with the following values:

Obviously, these values should be considered as a "chain" of voltage drops up to the heads of end users, containing such voltage drops within the limits of the proper functionality.

Established how many and where the electric utilities will be installed, the first action will be to analyze where the cabin of MV/LV transformation may be properly located or, in the case the extension of the plant will be large, the dislocation of more MV/BT cabins in focal points for the users and, if necessary, for high loads, the power substation HV/MV.

Based on these assumptions, the electrical designer will draw up one or more utilities lists and will realize the main single line diagram with the subdivision of primary and secondary switchboards. 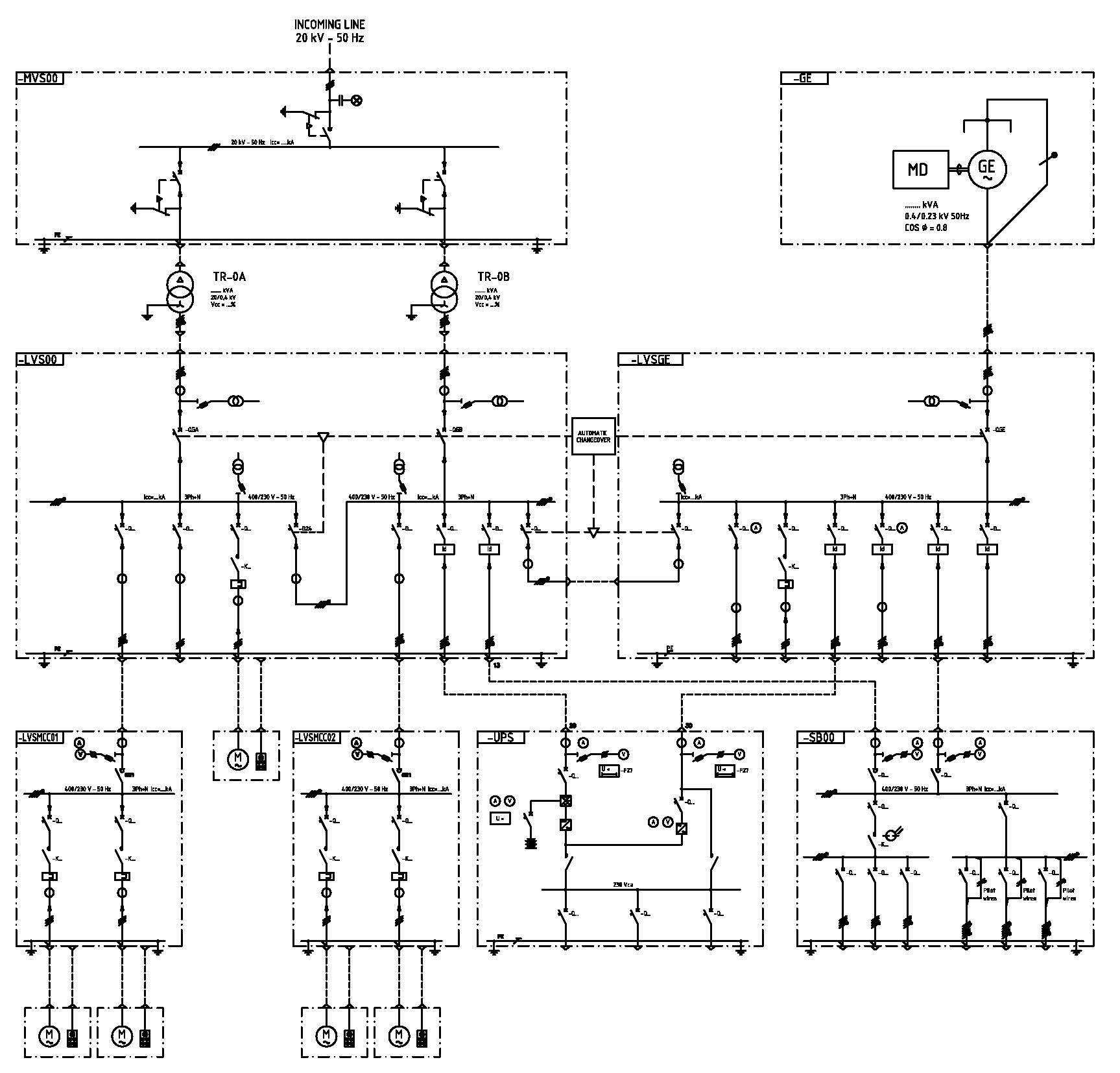 Each system has its own specific plant characteristics which can be summarized in: 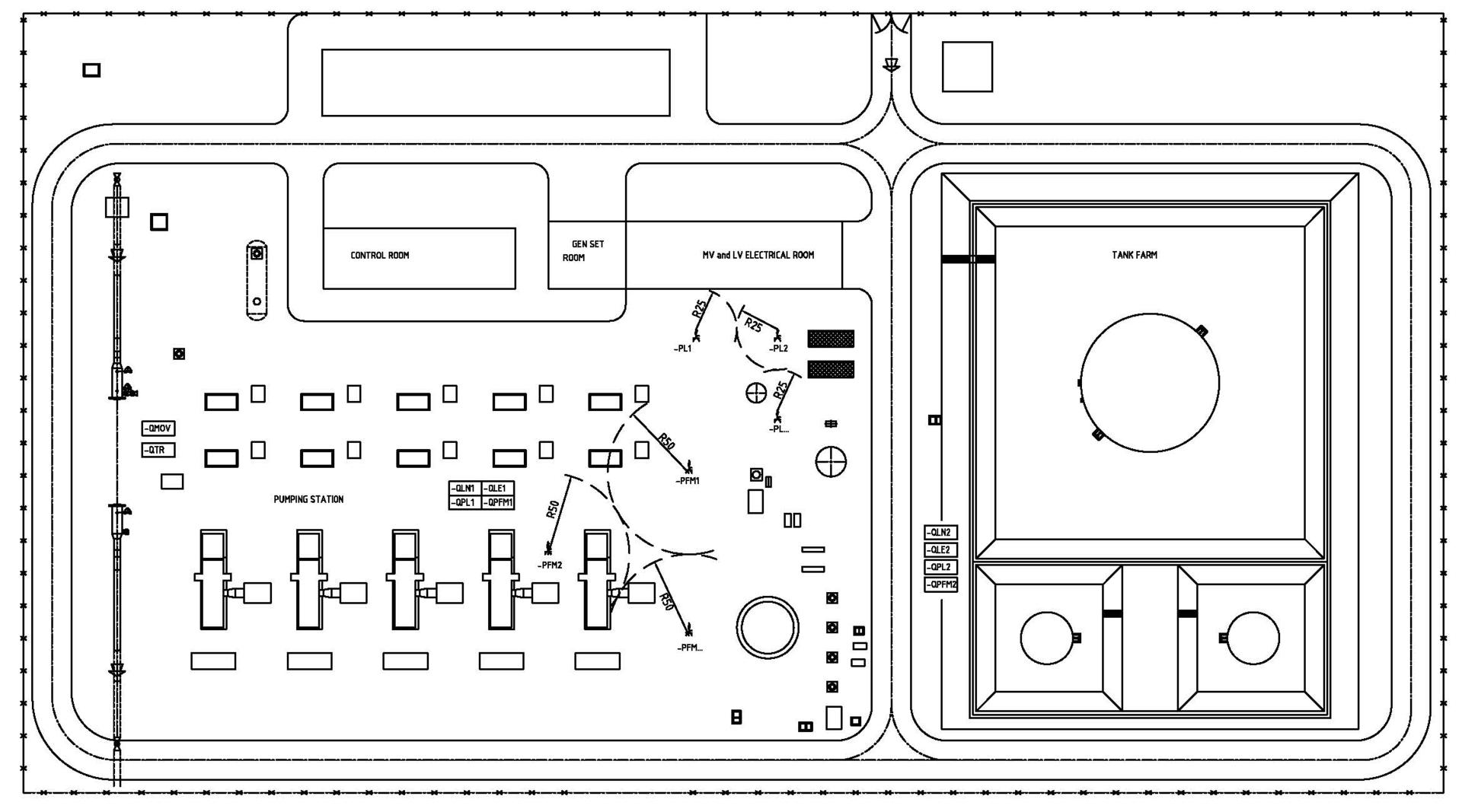 The normalization of cable lines is designed in order to have a proper installation and maintenance in the life time of the plant and, for these reasons, the designer adopt systems of laying cables according to the weather conditions, the temperature variation in the subsoil, the proximity of active cables (hot wires) and of the voltage levels, calculating the sections in function of the levels of voltage drop mentioned above.

The normalization of circuits, except that for individual utilities such as motors, heat exchangers, heaters and complex equipment packages for which you have dedicated lines, such as feeder circuits for lighting, tracing systems, lighting and power sockets circuits and motorized valves feeder circuits, can be defined with circuits that, starting from specific local switchboards, will be able to feed such systems with voltage drops contained, and then with normalized sections of the cables.

2. The orographic location of switchboards

The orographic location of switchboards is another of the various analysis functions that the designer must consider in order to have a optimum "cover" of general services required for a proper system operation.

The normal lighting levels, except for specific requirements of the project, are measured in a horizontal plane at one meter from the floor and should be considered as average values over the year, considering an average decline of 20% compared to the normal level.

The emergency lighting levels, measured on a horizontal surface at a meter from the floor and regarded as average values over the year, except for specific requirements of the project, must meet the mandatory requirements of EN 60598-2-22 and must ensure:

As shown in the lay-out plan above, the electrical circuits for general services are divided into:

2. Emergency lighting circuits, designed to operate when the power of the normal lighting fails (CIE Publication 17.4) which are divided into: (-QLE ...)

3. Security lighting circuits which are part of emergency lighting designed to ensure the safety of people during the evacuation of an area or of those attempting to complete a potentially dangerous operation before leaving the zone. (-QLE ...)

4. Backup lighting circuits, which are part of the emergency lighting that allows to continue normal activities without substantial changes. (-QLE ...)

5. High-risk areas lighting circuits which are part of the emergency lighting aimed to assuring the safety of the people involved in processes or potentially dangerous situations and to allow appropriate shutdown procedures for the safety of operators and of occupants of the rooms. (-QLE ...).

The technical innovation has brought a radical change in lighting systems, change due to the introduction of new LED lighting fixtures that, at the same luminous flux, have the advantage of absorbing an amount of energy some times up to 70% less the energy required with the use of traditional discharge lamps or fluorescent lamps lighting fixtures.

For this reason, will be possible to revise the basic concepts of circuit sizing which, as standard practice up to today, provided a maximum load of 2 kW for each light circuit, in order to have a homogeneous and unified circuitry for a localized distribution.

Now, on the basis of what described above, such circuits will have less power and, therefore, it will be possible to provide switchboards with several outgoing but with equal total installed/absorbed load.

Similarly, but without the decrease of load, even the remaining systems mentioned above require a specific engineering for each type of plant, keeping the usual engineering criteria such as:

For the reasons above, the designer of the system, pays great attention for a correct selection of the types of materials, depending on the specific needs of the plant within which such equipment must operate.

Cortem Group, always attentive to these issues and always looking for new technologies to improve its products by reducing the environmental impact both in energy consumption and disposal at the end of life, has, within its manufacturing unit in Villesse, a technical staff for research and development of new technologies.

As you can see, the list of variables that contribute to a proper design are varied and not easily predictable in the early stages of the design, so the search for a normalization is an excellent tool to predict the changes in the various stages of the engineering details.